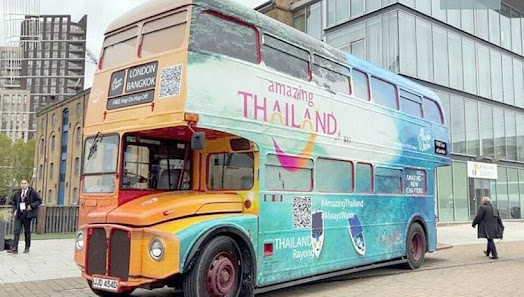 Beneath the logo are images of boats in the sea, with the hashtags #AmazingThailand and #AlwaysWarm, as seen in photos by Pattaya Mail. TAT’s new advertisement promotes Thailand’s eastern province of Rayong, as well as Pak Meng Island in Trang province.

TAT is in the midst of launching several new campaigns to draw tourists to the Land of Smiles. Earlier this month, TAT revealed a deal to bring more tourists to the kingdom from the United States and boost the nation’s ailing economy.

TAT is also planning several campaigns focused on Chiang Mai, hoping to draw visitors to the world-renowned province during the High Season from November to March. The campaigns promote Chiang Mai’s craftsmanship, eateries, temples, and the historic Lanna Kingdom.

TAT is now set to surpass its target of 10 million tourists by the end of the year thanks to an influx of Malaysian and Indian visitors. Thailand has welcomed over 1 million tourists from Malaysia and almost 600,000 tourists from India so far in 2022. Last week, nearly 50,000 foreign tourists arrived at Suvarnabhumi Airport in one day.

We’ll have to wait and see if TAT’s bus campaign in London pays off and if TAT manages to draw more British tourists.

Posted by Gerrit Tienkamp at 09:18