APEC 22: Immigration announce results of crackdown on foreign illegals ahead of international meet 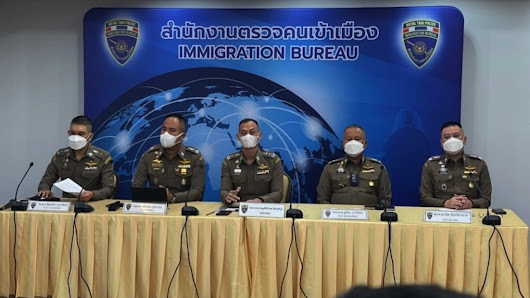 #Thailand's Immigration Bureau - that last week along with tourist police mobilized 550 men - announced the result of a pre APEC 22 crackdown.

Results of the efforts on Thursday to Saturday last week were announced by IB chief Pol Lt-Gen Phakphoomphiphat Sajjaphan and other senior immigration police on Sunday.

A total of 785 foreigners on overstay were rounded up.

Some 1,249 people who illegally entered the kingdom were found.

Warnings and advice were issued to 2,723 foreigners about reporting their address in Bangkok.

587 people like landlords and owners of properties where migrants and foreigners stay were fined for not reporting under Article 38 of the IB code.

Thai Rath also reported further developments on the arrest of a Chinese national called Sao and his Thai driver Satawat, 36. He was driving his boss around as if he were a diplomat.

Two Chinese nationals named only as Lee, 27, and Hoo, 40, were arrested on Interpol Red Notices.

Jang, a Taiwanese was found using a Cambodian passport and following contact with the Taiwanese embassy he was found to be another person and was mixed up in call center fraud in the Philippines.

Posted by Gerrit Tienkamp at 09:19