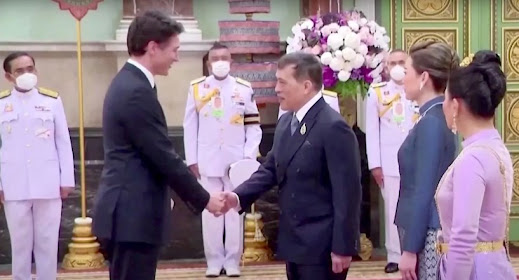 With Bangkok full of top-level officials from around the world or that APEC summit this week, a special royal appearance was made. His Royal Majesty King Vajiralongkorn and Queen Suthida Bajrasudhabimalalakshana treated leaders from the APEC meeting to an audience with them last night.

The meeting took place on the grounds of the Grand Palace in the Chakri Maha Prasat Throne Hall. The royal couple was joined by Her Royal Highness Princess Sirivannavari Rajakanya to greet the foreign dignitaries. Each international bigwig was presented to the King and Queen byPM Prayut Chan-o-cha.

Among the international political leaders in attendance at the private audience with the Royal Family were Saudi Arabia’s Prime Minister Crown Prince Mohammed bin Salman, the president of France Emmanuel Macron, and US Vice President Kamala Harris. Leaders from China, Japan, and Canada also joined in the meeting with the Royal Family.

The Asia-Pacific Economic Cooperation summit is wrapping up today with the final official statement being drafted and signed. The statement will include commitments and road maps for the region, including the United States pledging to open small modular nuclear power plants in Thailand. There is some reported contention in putting out a statement on Russia with most – but not all – attendees speaking out again their invasion of Ukraine.

Before the summit ended though, some of the leaders were able to attend this meeting with the Royals. In the Throne Hall, they took souvenir photos with the Royal Family which will be framed in silver niello. The Thai government will present that framed photo, along with six other special souvenirs to the attendees, according to Thai PBS World.

Posted by Gerrit Tienkamp at 09:16